GoHomeTools is supported by you, meaning if you buy through our links we may earn an affiliate commision. Learn more. 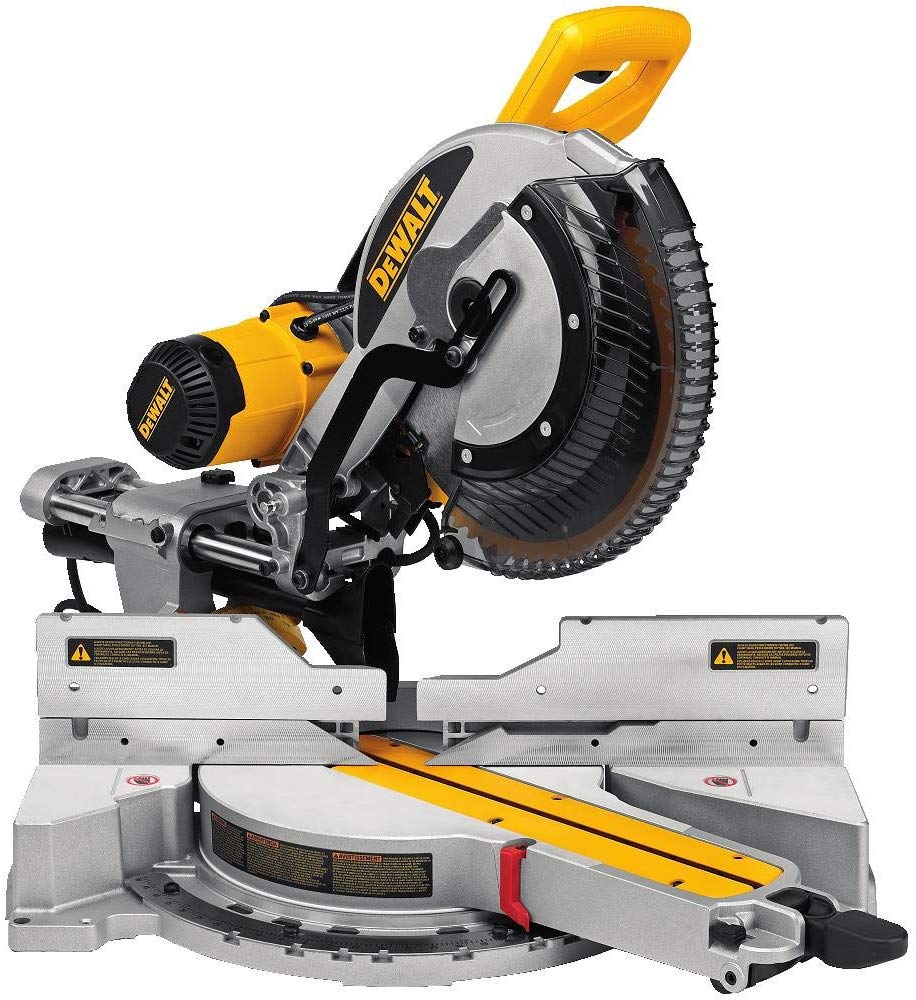 The Dewalt sliding compound miter saw features a design that’s pro all the way. The chrome, black, and yellow design gives this saw a look that says it’s all business. Its horizontal dual slide bars are one of the first features most people notice because they were used on an earlier top-selling miter saw made by Dewalt in the past. However, the past model had a vertical bar design instead of horizontal. Additionally, the sixty-degree and fifty-degree miter capabilities will also capture your attention.

This is a versatile saw that has a lot to offer the novice, experienced DIYer, and the pro. Its solid design and powerful motor are just two reasons why this model is flying off the shelves. If you’re familiar with Dewalt, then you already know that this saw is going to offer you something you won’t find in competing models, such as the powerful LED cutting guide, the horizontal dual-rail design, and a cutting process that will definitely make your work go much faster.

Our Verdict: Right from the start, this saw is pretty impressive. Just one look at the spec sheet and you can tell this is a saw that’s designed for the pros, however, its intuitive controls and setup also make it very beginner-friendly. Its reliable LED cutting guide can be used both indoors and out, unlike a laser guide system, which usually fails in bright sunlight. The horizontal dual-rail design changes everything and allows you to quickly make short work of crown molding, plywood, and more. The only real fly in the soup is the poor dust collection system, which the manufacturer claimed is able to collect up to seventy-five percent of sawdust, when in reality, forty percent would be more accurate. Aside from the mediocre dust collection system, you’ll get a saw that’s reliable, powerful, and one that will definitely speed up your workflow.

Offering a three thousand, eight hundred RPM motor at fifteen amps, this model offers plenty of push. Whatever you’re sawing through, you won’t feel a drop in power. It comes equipped with an exclusive back fence design that cuts up to two by sixteen dimensional lumber, at ninety degrees, with two by twelve at forty-five degrees. The saw’s dust collection system also has a reputation for efficiency, with a claim that it can capture over seventy-five percent of dust and debris. This model may look very intimidating and complicated to use, but it actually comes with many features that are designed to make your life a lot easier, which is also why it’s considered one of the most beginner-friendly models on the market, despite the fact that it’s powerful enough for pro use. If you’ve never used a miter saw before, then I highly recommend reading the user’s manual from cover to cover before you begin. You can also stop by and read my informative guide on miter saw tips and tricks for beginners, which will give you some great pointers on how to test drive your new saw.

The system is probably one of the most helpful features that this saw has to offer. Instead of a standard laser cutting guide, which you’ll find on many competing models, the manufacturer has added a powerful, small LED light that’s located directly over the blade. The light is strong enough to cast a shadow of the blade directly onto the material below. As you lower the saw blade, the shadow of the blade will narrow to the precise location and width of the cut. It will work for every bevel, miter, or cut, however, bevel cuts will require a slight tilt of the head in order to see clearly. The shadow will even be visible in bright sunlight, which is what makes this feature so helpful, and more effective than a laser guide. It also will not lose accuracy should you accidentally bump the saw during use.

One feature you’ll find yourself relying on often is the back fence. This feature will give you the ability to crank up the normal cut depth. You can cut one material at a ninety-degree angle at a full sixteen-to an eighth of an inch and it can also handle a two by twelve cut at a forty-five-degree angle. This will come in handy since it reduces the usual hassle of cutting wider materials using a chop saw. This model can handle it all: the first cut, flipping, lining up to the initial cut line, then cutting an additional time.

The double bevel cut option will come in handy. Unlike a traditional single-bevel cut saw, this model is able to lay down for a bevel cut in both directions. You won’t have to worry about flipping the material, which can potentially damage it. You also won’t have to worry about transferring the measurements from one side of the material to the other in order to cut it finish side down. There are also a couple of foldaway stops for the right and left bevel that offers cuts at twenty-two and a half inches up to thirty-three inches. If you have a huge job on your hands and you have to cut through a big stack of molding, then this feature alone will save you plenty of time. The fact that these stops are so easily accessible makes for more options to speed up your work and allows for faster cuts.

The dual rail configuration is one of the best and biggest changes, which makes it one of the best 12-inch miter saws to date. Instead of two steel rails that are vertically positioned, this model offers horizontally positioned rails. When you use a saw with vertically positioned rails, you’ll have issues with the limited amount of flex at certain angles, which can create issues when it comes to achieving a straight cut, or corners that aren’t perfectly tight. The horizontal rails changes all of that. With the rails configured in an upright position, they become vertical in relation to downward pressure, which makes them stronger as the saw is placed at a forty-five-degree angle.

The manufacturer claims that this model offers one of the most efficient dust collection systems compared to other saws in this price bracket, stating it can collect up to seventy-five percent of dust. But unfortunately, this system is anything but efficient, at least if you don’t hook up the system to a shop vac. The long dust tube tends to clog frequently and very easily, which will lead to an occasional cloud of dust in the user’s face as they cut. The Bosch Power Tools GCM12SD, offers a dust collection system with a ninety percent efficiency rating and can easily manage capturing dust and debris, increasing the user’s visibility while keeping the workpiece free and clear of debris. The Dewalt dust system definitely needs a redesign, considering the speed at which the tube gets clogged will usually depend on the level of moisture in the material you’re cutting, in addition to any moisture in the air. This seems like a big oversight on the manufacturer’s part.

The competing model by Bosch comes equipped with a patented glide system that’s designed to accommodate wider cross cuts, in addition to superior alignment, despite the saw’s compact design. It’s highly adjustable and able to handle a wide range of cuts, but one of its most important features is its powerful dust collection system, which easily blows the Dewalt’s out of the water. A dirty work area can make it difficult to clearly see the cutting line, which can result in an inaccurate cut, it can also be potentially dangerous for the user. Aside from its efficient dust collection system, the Bosch also features bevel detents for zero, thirty-three degrees, and forty-five degrees for right and left, which makes it more beginner-friendly and allows you to make accurate cuts each and every time.

The Dewalt DWS780 sliding compound miter saw is powerful, efficient, and will do wonders in terms of speeding up your workflow. Despite some small issues with the dust collection system, this model is extremely versatile and precise. It’s got all the right bells and whistles and will quickly replace your old Dewalt miter, however, if you plan on using this saw in humid conditions, I definitely recommend attaching a shop vac to the dust collection system in order to prevent a mess. Hopefully, the manufacturer will make some important changes to their mediocre dust collection system on future models. In the end, this model still remains one of the most versatile models on the market, earning it a rating of four and a half out of five stars.

This website uses cookies to improve your experience while you navigate through the website. Out of these, the cookies that are categorized as necessary are stored on your browser as they are essential for the working of basic functionalities of the website. We also use third-party cookies that help us analyze and understand how you use this website. These cookies will be stored in your browser only with your consent. You also have the option to opt-out of these cookies. But opting out of some of these cookies may affect your browsing experience.
Necessary Always Enabled
Necessary cookies are absolutely essential for the website to function properly. This category only includes cookies that ensures basic functionalities and security features of the website. These cookies do not store any personal information.
Non-necessary
Any cookies that may not be particularly necessary for the website to function and is used specifically to collect user personal data via analytics, ads, other embedded contents are termed as non-necessary cookies. It is mandatory to procure user consent prior to running these cookies on your website.
SAVE & ACCEPT